The SECRET to SUCCESS in EVERYTHING

I once went to a sweat lodge. (Not recommended if you are concerned about hair frizz).
I originally intended to find an Indian Reservation, but instead landed in a make shift sweat lodge in the backyard of a suburban home of a Doctor. Not a medical doctor mind you, in case I passed out from heat exhaustion, but a PHD.... Actually, I think he was a dentist.

After giving him the NYC side eye, I still relinquished my cash.  Don't ask. Call it a twenty-something leap of faith. OR - Things you don't tell your parents when they ask so what'd you do this week (while searching for yourself)?

I learned the secret to success in EVERYTHING. Yes, I said EVERYTHING. And that's without hype. I say that because I applied it to EVERYTHING and it WORKS EVERY TIME.

You see. It was about 120 degrees in the sweat. I'm not exaggerating.  There was a bowl of cool ice water in a wooden bowl with a ladle in the center of about 20 people. After the first 2 minutes, no one was looking at anything but the water in the middle of the cramped make shift suburban lodge.The RULE was that no one could access the water except to offer it to someone else who was thirsty. 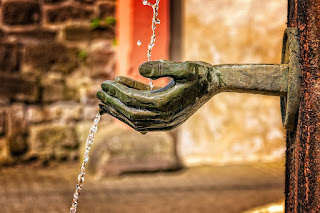 I believe many of us initially had the same thought. "I'm not sharing that ladle with a bunch of strangers." I'm pretty sure others were hoping no one had any cold sores. That's like offering someone a brownie with the same hand you used to hold a subway rail.

We were strangers among strangers. I had just left NYC and the last thing I wanted to do was speak to a bunch of weary middle aged baby boomers (most of the participants) thinking they were going to have a far out 70's experience.  But that wasn't the case.   Every thought about whose lips were or were not clean melted away with each increasing parched breath.

We were all united in our sweaty discomfort and our ONLY desire was a sip of cool water. If we left it (the water) there too long, perhaps it would start boiling or something even worse; EVAPORATE!

I don't recall who it was since all of us were on the same page. All I can recall is someone offered a sip of water to someone who looked as if he/she was about to pass out. Could have been me. Idk. I just remember getting "social".

"Would you like some water?" said I and everyone else to our neighbor on the brink of collapse. EVERYONE had the same response in one form or another. "YES please." "YEZZZZ." "Yesssss."  "Yeah thanks." "Please." "Pleasssse." "Thank  you." "Sure." "Thanks yeah."

No matter how cool anyone attempted to be, we were all desperate.  The stranger would accept the offer, then return it to the giver. And so it went, around the circle and back.

Then something even more odd than me sitting in a cramped space amongst a group of strangers in my shorts and bathing suit happened.  (Only New Yorkers will agree with that.) I had stayed for the entire hour even though I initially felt like I had mistakenly gotten off the train in the middle of an abandoned subway tunnel.

Mind you; I had already started plotting my excuse to leave in the first five minutes like it was a super geeked soul cycle class on steroids (ok that's another story).  I was in way over my head.

But I actually stayed in the sweat lodge. And the hour passed quickly!

I only remember staring at the bowl and looking for the next person who looked as if  he or she was on the brink of collapse, so I too could end their suffering as well as my own. We were all connected in our need to partake of the highly coveted H2O lathering itself in a wooden bowl which for some reason was just as full at the end of the hour as it was at the beginning.  In addition, a cool breeze had permeated the air like an invisible air conditioner in a desert. 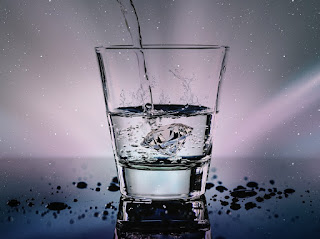 We were cool. Calm. And yes, we were all (if I recall correctly) hydrated.  Giving what we needed to others before taking it or asking for it ourselves created an abundance of that which we all needed. No one went without.

Although my new peers exited and joined the "good doctor" (I suppose) for  what I assume was a nice chat and snacks afterwards, I ran to gather my thoughts and capture my experience on paper. Forgive me. I was drenched. My first thought was "take a shower" not "let's sit down and talk about it like we just finished a marathon together."

Would I do it again? Probably not. But the take away has lasted me for years. And today, as I needed a quick reminder, I decided to extend this share with you. I hope you will do the same.

And remember, whatever it is you need or seek is just one give away. The size or proportion of what you share is not as important as the intent. I want you to have hope today that what ever it is you need, it is within your reach.  You're just a give away.

I also use this to tell others that if you seek work, or increase in business - volunteer somewhere meaningful to you that helps others.  Keep searching. Don't give up. But certainly give.

A generous person will prosper; whoever refreshes others will be refreshed. Proverbs 11:25